Half of Seminarians and All Priests at Wigratzbad Have Corona

OPFENBACH, Germany, March 20, 2020 (LifeSiteNews) – Almost all priests and roughly half of the seminarians currently at a German seminary of the Priestly Fraternity of St. Peter (FSSP), a traditionalist community of priests and seminarians, have been infected by the coronavirus.
On the evening of March 13, the seminary had first announced that a priest, who stayed at the seminary as a guest, had contracted the virus. At the time, the community, which is dedicated to the celebration of the Traditional Latin Mass, had stated that all Masses in Wigratzbad would take place without the seminarians joining.
“With the powerful help of faith, hope and charity, we do not let ourselves be discouraged. In a few days, the first healed ones will be able to take over from the newly sick, to maintain the spiritual and material life of the house,” the seminary community wrote.

(Wigratzbad) The Fraternity of St. Peter (FSSP) has published the latest statistics of its personnel. The community of world priests, who cultivate the traditional Roman Rite and teach tradition, currently has 270 priests, 23 deacons and 132 seminarians.
The priestly brotherhood was established in July 1988 as a clerical society of apostolic life. It was founded by six members of the Society of Saint Pius X, who did not want to take the step to  break with Rome, which was undertaken by the bishops who were participated in the episcopal consecrations not allowed by Pope John Paul II.

During the founding month, the founders were received in audience with  Pope John Paul II and Cardinal Joseph Ratzinger. They wanted to continue the work of Archbishop Marcel Lefebvre in an ecclesiastical framework and in unity with Rome. Rome offered  them a quick canonical recognition. As early as 18 October 1988, the Holy See established then as a society of papal law. 2003 was the final recognition by Rome.
As a result of the events of July 1988, a new space in the Church had apparently emerged for another priestly society, which was bound to  tradition. While the Society continued its growth outside of Church recognition, the new establishement of the Society of Peter grew within it. It was not just a matter of course.

Obviously there was and is need. The Fraternity occupies a special task in priestly education. In Germany a priest's seminary is held in German and French, in the USA and in Australia, two seminaries in English. In Mexico, a Spanish priestly seminary is under construction.

Since its inception the Society of Saint Peter has experienced  steady growth. Over the past twelve years, an average of eleven new priests have been consecrated to the Society every year. In 2016, 16 new priests were consecrated. In 1988 there were six founding fathers at the beginning. In 1992 the Society already had over 100 members, In 1997, 200, 2006, 300 and 2014, 400. Today, there are 425 members.
The Society  has 117 branches worldwide, including 82 canonically built houses. From these, 226 locations are supervised in 124 dioceses. The number of parishioners supported by the Society  is 38. 51 Society Brothers come from the Federal Republic of Germany, 13 from Austria and three from Switzerland. The German district is responsible for 68 locations in 23 dioceses.

Founded in 2007, the Confraternity of Saint Peter , an association for the faithful, who feel particularly indebted to the FSSP and want to support their apostolate through prayer and sacrifice, counts 5,231 members. 856 of them come from the German-speaking areas.

Prayer Site Wigratzbad to the Fraternity of Saint Peter

In the German-speaking world, it is the special wish of many faithful, considering the generous and paternal gesture by Bishop Konrad Zdarsa of Augsburg. Since the oldest priestly seminary in the Society is located in Wigratzbad, and this place is especially connected to a place of prayer, there is a desire that the diocesan place of prayer be entrusted to the Society. Since 1976, the prayer site has been managed and supervised by a diocesan priest, who is the director of the prayer place. In 2011, the acting Prayer Director was appointed. The relationship with this priest and the seminary has not been entirely  friction-free due to incomprehensible unkindness.
Through the seminary there are  many priests and seminarians who are available for the pastoral care, service of the altar and the care of the pilgrims. Liturgical points of friction, as they were provoked by unnecessary reconstruction work of the altar room of the Sacred Heart of Jesus and the Sacred Heart of the Virgin Mary, are to be automatically repaired. In times of priest shortage, the diocese would have more priests  available for other tasks, the Wigratzbad prayer site would be in the best hands and would create a precious spiritual center of  Roman tradition in the diocese, which is rich in other pilgrimage churches.
Text: Gottfried Enderle
Image: Fssp.org/gebetsstaette.de (screenshots)
Trans: Tancred vekron99@hotmail.com
Katholisches...
AMDG

Posted by Tancred at 4:40 AM 8 comments: Links to this post

From Empty Seminaries to Full Seminaries -- Ordinations at the Society of St. Peter 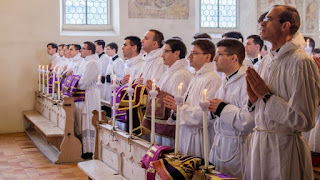 (Wigratzbad) Last Saturday, Bishop Vitus Huonder of Chur ordained 11 subdeacons of the Fraternity of St. Peter. At the same time the Bishop of Chur ordained 15 seminarians in the traditional rite to minor orders as porters and lectors. Five seminarians were ordained exorcist and acolyte. All ordinands are preparing for the priesthood at the International Seminary of the Society St. Peter of Peter (FSSP) in Wigratzbad in the diocese of Augsburg near Lake Constance.

HERE YOU CAN ADVERTISE »
This coming February 20th, there will be another 13 subdeacons  ordained at the second international seminary of the FSSP in the US. "Therefore, there is a realistic prospect that in 2017, 24 new priests are to be ordained for this old ritual community," said Messa in Latino .That would be twice the average of the past twelve years.
"Perhaps we should make the Holy Father aware that there are not just empty seminaries, but also full seminaries when he complains of the lack of priests next time. And that there will be a reason when there are the seminaries of tradition that are full," says Messa in Latino alluding to the speech of Pope Francis last February 1st, to participants at the conclusion of the Year of Consecrated Life .
At the Pontifical Mass, Bishop Huonder was assisted by Father Arnaud Evrat, the General Secretary of the Society of St. Peter, Father Jean-Laurent Lefevre, House Master of the Establishment at Fontainebleau, and Father Christian  Jäger, Administrator for the Apostolate of the Society of St. Peter in Munich.
Text: Giuseppe Nardi
Bild: FSSP Wigratzbad (Screenshots)
Trans: Tancred vekron99@hotmail.com
Link to more photos @ Katholisches...
AMDG
Posted by Tancred at 10:03 AM 22 comments: Links to this post

15 New Subdeacons Ordained in the FSSP 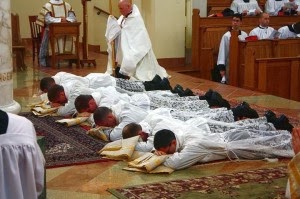 (Wigratzbad) 15 seminarians are receiving the subdiaconate for the Fraternity of St. Peter (FSSP) on the first two Saturdays in February. The clergy of the Institute of tradition is characterized by a very good and thorough training.
Nine candidates of the Seminary of Wigratzbad were on  consecrated on 15 February  by Archbishop Haas of Vaduz in the parish church of Deuchelried in Wangen im Allgäu to the subdiaconate. There are four Frenchmen, two Canadians, one Colombian, a candidate of the Dominican Republic and one Austrian. At the same time Archbishop Haas confered 21 seminarians minor orders.
Already on 1 February six candidates had been consecrated in Denton in  Nebraska to subdiaconate   Bishop Fabian Wendelin Bruskewitz, Bishop Emeritus of Lincoln, carried out the consecrations in the Seminary of the Fraternity in Lincoln.
The Fraternity of St. Peter, an Institute of Tradition,  is as a whole is characterized by a very well-educated clergy that stands out not only in the worthy celebration of the Immemorial Mass of All Ages, the serious administration of the sacraments, but also in catechesis and pastoral care. The Fraternity of St. Peter has published pictures of the Subdiaconal Ordination in Deuchelried .
Text: Giuseppe Nardi
image: Rorate Caeli
Trans: Tancred vekron99@hotmail.com
Link to Katholisches...
AMGD
Posted by Tancred at 10:39 AM 2 comments: Links to this post

Bishop Zdarsa Pays a Visit to FSSP Seminary in Wigratzbad 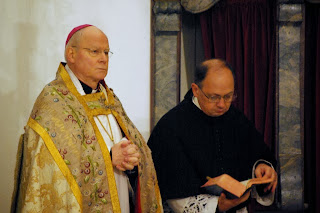 (Wigratzbad) On 21 November endowed Bishop Konrad Zdarsa of Augsburg paid a visit to the traditional seminary of the Priestly Fraternity of Saint Peter (FSSP) in Wigratzbad. It was the first visit by the diocesan Bishop, after the hunt and the resignation of Bishop Walter Mixa, who succeeded him in 2010. Wigratzbad located in the south of the Diocese of Augsburg, near Lake Constance.
Bishop Zdarsa celebrated solemn vespers with the priests and seminarians of the Fraternity of St. Peter, a solemn Vespers in the Extraordinary Form of the Roman Rite, which was held in the parish church of Opfenbach. Then the bishop visited the seminary. Regent Father Patrick Fay des Choisinet showed him the building and introduced him to the seminary community. The visit included a dinner in honor for the bishop.  It offered an opportunity to become aquatinted and exchange ideas.
The predecessor of Bishop Zdarsa, Bishop Mixa visited the seminary in 2008.
Wigratzbad also has a shrine and witnessed the establishment of the Catholic television station K-TV by Pastor Hans Buschor from the diocese of Sankt Gallen.

More pictures of the event at Katholisches...
Posted by Tancred at 6:47 AM 3 comments: Links to this post

British Diocesan Priests on Retreat at Society of St. Peter in Wigratzbad 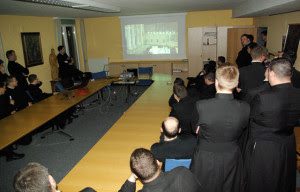 (Wigratzbad) In April, the traditionally associated Fraternity held retreats at their seminary in Wigratzbat for 15 diocesan priests from various parts of Great Britain (England, Scotland and Northern Ireland). The four-day retreat was under the theme "The priest and the Eucharist in the Current Magisterium of the Church."

The occasion for this retreat was the tenth anniversary of the "groundbreaking encyclical" by John Paul II, Ecclesia de Eucharistia of May 2003, says the Fraternity of St. Peter. The retreat preacher was Father Arnaud de Malleray FSSP, the spiritual assistant of the lay association of the Fraternity, which is called the Confraternity of Saint Peter. He spoke in his lectures on the centrality of the Eucharist in the life of the priest, the essence of the real presence of Christ in the Blessed Sacrament, the sacrificial character of the Mass, Eucharistic Adoration and the Liturgy.

The British priests experienced in Wigratzbad the spiritual atmosphere of the Marian pilgrimage site with its opportunities for perpetual adoration and to meet the residents of the Seminary of St. Peter. The Bishop of Portsmouth, Bishop Philip Egan, in whose diocese the Fraternity of St. Peter is active, had advertised the retreat in the circular to its priests.

Posted by Tancred at 7:11 PM 7 comments: Links to this post

(Wigratzbad) Curial Bishop Juan Ignacio Arrierta ochoa de Chinchetru, the Secretary of the Papal Advisory for Legislative Texts, dispensed the lower orders and the subdiaconate on the 11th of February at the Seminary of the Society of St. Peter in Wigratzbad in the Immemorial Rite of the Mass of the Catholic Church. The Spanish msgr. Arrieta belongs to the Personal Prelature of Opus Dei. The Titular Bishop of Sao Paulo di Civitate in Apulia is the 260th Bishop of the Catholic Church and the ninth Spanish Bishop, who has celebrated or participated in a Tridentine Rite of the Mass, since Pope Benedict XVI promulgated the Motu Proprio Summorum Pontificum.

Curial Bishop Arrieta, who has been in the Secretariat of the Papal Advisory for Legislative Texts, blessed seven Sudeacons. There are more than 80 Seminarians studying at the seminary of Allgau for the Society of St. Peter. Text: Giuseppe Nardi Bilder: FSSP
Posted by Tancred at 8:48 PM 2 comments: Links to this post