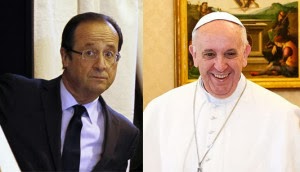 (Paris / Vatican) On 24 January French President François Hollande was received by Pope Francis in audience. The contrast could not be greater. France's socialist government is in a hard cultural struggle against the non-negotiable principles and thus against the Catholic Church. To be precise, it is a brutal war of extermination with abortion, euthanasia, gay marriage, adoption rights for homosexuals, surrogacy and gender ideology. A group of French Catholics has appealed to Pope Francis. The call has a petition that has been signed within a few days of more than 100,000 Frenchmen. The appeal in full:

You have granted the President of the French Republic an audience and will receive him in the coming 24 January  at the Vatican.
With faith and hope, we turn to you, Your Holiness, to ask you to kindly to make known to  Monsieur François Hollande  to address the deep unease and growing concern of many French Catholics.
Because  French Catholics,  who  have demonstrated en masse  in order to express their rejection of the so-called Mariage pour tous-law, an unjust law that arbitrarily deprives the child of his right to have  a father and a mother  discomfort, and the gate that has opened  the door for the commercialization of the human body have  not been heard by Monsieur François Hollande. These rallies, although peaceful, have been suppressed by unworthy methods, such as, among others, we have even been charged under the lamented European Union and its resolution No. 1947.
Unhappy because the French Catholics have been the object of a media smear campaign of rare hardness for the last  year. The Church desecrations have multiplied in recent years, especially by Femen , a group of radical feminists. This profanation has been hardly found any response in the media. No member of the government or the responsible politicians of the ruling majority considered it necessary to condemn this desecration, which deeply hurt us, and not even a word of solidarity was pronounced. The ads were allowed to be posted. Many French Catholics can not help but to draw a comparison to the strict, unanimous and legitimate reactions against those responsible when other religious communities are under attack in France.
Unhappy finally, because no longer lett the ridicule, the teasing and the attacks on  the highest places can't even be counted.  On a  large national radio station, the Minister of Labor made a joke about the Holy Eucharist ​​a few months ago, declaring, among other things: "We don't make any  invocations. We are not at the Mass, to pray. We are acting."  On social networks, the parliamentary staff of a socialist senator and cosigner of the gay marriage law, for the crowd to be fired upon, who were demonstrating against the Lex Taubira  and this senator still received the full support,  Such examples like this are unfortunately,  very many. French Catholics are tired of being a religious group that can be disparaged with impunity.
There is worry because these attacks against Catholics are a large step backwards in  fundamental and human rights, which is fostered by the Government through the promotion and blows the culture of death.
Last July  the National Assembly (lower house of parliament) established the conditions for research on human embryos. The French Catholics affirm their rejection of an idea of the child, where the child doesn't have any rights outside of his parents plans for him.
Recently, the offense of "obstruction of abortion" on the mere expression of criticism in the killing of unborn children was extended. French Catholics to be denied in this way, in violation of the freedom of expression, which was previously a basic pillar of our democracy, to express their opposition to abortion and abortion policy in the future.
The government lays the foundations to bring a bill to a vote, legalizing euthanasia. To this end, many were members of the National Ethics Committee of Monsieur François Hollande included, which today has no religious members.
Finally, the education minister, who is actively promoting gender theory at the schools said, without any ifs and buts according to his will: "We need the Catholic religion to be replaced by a republican religion" and "any  qualifications by  the student must be torn out by the roots" including the familial bond. In this way, the educational rights of parents to educate their children according to their beliefs is threatened.
Your Holiness will naturally find better words than we do, to bring our discomfort on the topics expressed here. However, we ask with confidence and gratitude, that you will officially pronounce to Monsieur François Hollande during his visit this coming 24 January, the terrible concern of many French Catholics. It is an honor for us to be able to say with the greatest respect, to be the humble servant of Your Holiness.
A Group of French Catholics
Translation into German: Giuseppe Nardi according to the statement by  Abbé Pierre Laurent Cabantous
image: Wikicommons / tempos (assembly)
Trans: Tancred vekron99@hotmail.com
Katholisches...
AMGD
Posted by Tancred at 7:12 PM 7 comments: Links to this post

Hollande and His Government: "A Troop of Cathophobes" 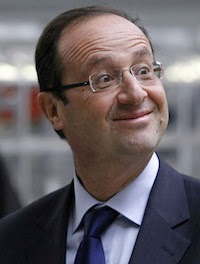 (Paris) Fabrice Madouas addresses "Catholics on the Black List" in an excellent way, in his published article for "Valeurs Actuelles" about the situation in laicistic [secular] France at a worrying point.

The growing gap between the Catholics and the government can not be explained only by the indifference of the President. From the first day of his term, he placed his seat under the patronage of radical secularist Jules Ferry [1] , whose goal is to organize a "humanity without God and King." This is a reason why Catholics are concerned about his program and are outraged about the humiliation and harassment that the left inflicts on the Church. This strongly suggests that, the government wants confrontation, hoping to mobilize their own camp by it.

Christiane Taubira [2] provided the best example when she received Cardinal Vingt-Trois with casualness, when he wanted to talk to her about the marriage, which bordered on contempt. The deputies of the Left could feel such a hostile environment that they gave him to understand so that the opinion of the Church for them counts for nothing in the debate. This abruptness is not surprising: not a single government minister, says Ayrault of himself, are practicing, only six call themselves believers, including Cecile Duflot.

Last winter, the housing minister had the audacity to publicly comment on the assumption that the Church cares little for the poor, so he threatened to confiscate ecclesiastical buildings to house the homeless. But it's still Vincent Peillon who wins the prize for anti-Church Aggression: In January he contested the existence of Catholic doctrine in question in public debates on gay marriage [aberromarriage]. Cardinal Vingt-Trois reacted strongly: "If not even a discussion is any longer possible, then there is an official state doctrine and the thought police." [On Education Minister Vincent Peillon see separate report .]

Are Catholics become second-class citizens? The question is all the more justified because the government shows a lot more respect to other religions this year took [Interior Minister] Manuel Valls twice breaking bread, taking part in Ramadan. "One way for the Republic, to show their affection to the Muslims of our country," he explained. Also, something never seen by the public authorities, when churches and Christian cemeteries are desecrated, although it concerns more than 80 percent of all anti-religious violence in France.

Link to Katholisches..,
Posted by Tancred at 9:22 PM 7 comments: Links to this post