(Rome) The Vaticanist Marco Tosatti has now turned his eyes away from the Correctio filialis. The reason is a letter whose author he did not name by name, but a "high animal." This "high animal" deals less with theology, but more so with politics. Through the Correctio filialis  a different topic had disappeared from the headlines: the interview by Libero Milone. Milone was appointed Auditor General  by Pope Francis in 2015 for the Holy See and all its institutions. On the 19th of June, Milone was suddenly shown the door. One reason for this was the fact that the Vatican press office and curial Archbishop Angelo Becciu, a Substitute for the State Secretariat, was explained in the interview: Milone had "spied upon some representatives of the Holy See."
This  "high beast" explained this situation in a letter to Marco Tosatti, which has distracted our attention from the Correctio filialis and the petitions connected with it "for only five minutes ."

"My impression, which I have gained, is the customary (as in Vatikleaks 1 and Vatileaks 2): that this argument [the Correctio filialis] was used to divert attention from the so - called "Case Milone" and the Vatican finances about which I only know from what I read in the newspapers, including Milone's interview in Corriere della Sera.
After five years, we see that 'unrest' is growing exponentially because of Vatican finances. I do not know much, but if I could give advice to the Pope and, above all, to the Secretary of State, I would ask it to undertake an investigation into the investigations which the Vatican Taxes' Control Authority is managing and overseeing. Is it possible for directors, presidents, auditors to be dismissed, but those who would have to control everything, the AIF [Vatican Financial Information Authority], always remain untouched and unaffected, as if they did not exist? But do the leaders of the AIF really command? On behalf of whom?
Pope Francis, Cardinal Parolin, we beseech you for the good of the Church: Seek! Seek!"

The Vatican Financial Information Authority (AIF), mentioned in the letter to Tosatti, was begun by Pope Benedict XVI in 2010 under the constant pressure of international bodies for "more transparency". As head of the authority, he appointed a cardinal. Nevertheless, Moneyval, a Council of Europe expert committee for the assessment of measures against money laundering and terrorist financing, criticized the measure as inadequate.
A few months after his election, Pope Francis made far-reaching changes. The first operation took place on 8 August 2013. In November of that year, he entered a new law into power for the AIF with a motu proprio . At the same time the Global Players came under the advisory firms in the Vatican with his pontificate. Katholisches.info wrote on January 28, 2014:

" McKinsey , Promontory, Ernst & Young , KPMG: With the new pontificate, the Vatican also began a race to engage the most elaborate and costly consultancy companies in the world in terms of organization and finance. The world as a "global village" makes them indispensable and, above all, they themselves are indispensable. A system of efficiency and striving for profit, which reinvents itself independently and constantly increases in power. No finance minister comes out without them because they have long since lost perspective. For this reason the consultancy companies already write the laws themselves, which are blessed by the political process. This is also the case in the Federal Republic of Germany. In whose interest are a dozen international consulting firms working?"

The Swiss René Brülhart became the new director of the AIF in November 2012 to implement the demands of the Moneyval report, as the Vatican Press Office said. Since 2014 he is its president. According to Francis, Brülhart is bound only by the Pope, and has to report to him. This also applied to Auditor General Milone, but from September 2016 onwards, Francis did not receive him. Milone, who wanted to speak with Francis about his dismissal, did not gain access to him.
Brülhart made Tommaso Di Ruzza his successor as director. In addition to Brülhart and Di Ruzza, Maria Bianca Farina (Italy), Marc Odendall (France), Joseph Yuvaray Pillay (Singapore) and Juan C. Zarate (USA) are members of the AIF Board.

At the turn of the year 2016/2017, Marc Odendall had been named in connection with the conflict in the Order of Malta, between Grand Chancellor Albrecht von Boeselager and Grandmaster Fra Festing. Pope Francis placed himself on the side of Boeselager and dismissed the Grand Master. Francis drew upon on the report of a commission appointed by him. The commission had attributed to the Grand Chancellor, who had been dismissed at the time, faultless behavior. Odendall was one of the five Commissioners. According to a judgment of the Hamburg Regional Court, Boeselager knew about the distribution of contraceptives by Maltese International and also approved this. Thus, as far as the conflict in the Maltese Order is concerned, the behavior of the Grand Chancellor was not so faultless.
Grandmaster Festing had previously accused the commission of "bias" because at least three of the five members were in business dealings with Boeselager. The Pope did not care. Nor was he concerned that the Hamburg Court indirectly questioned the credibility of the Commission's report. Fra Festing's accusation was confirmed, however, Pope Francis applied the exculpatory report.
Boeselager and Odendall are linked to the Caritas Pro Vitae Gradu Charitable Trust (CPVG), registered in New Zealand, which is valued at 120 million Swiss francs  and is administered by a Swiss trustee.

The protective hand of the State Secretariat

The Secretary of State, in other words, Substitute for General Affairs Becciu, followed the dismissal of Auditor General  Milone. The State Secretariat holds the protective hand over the AIF. The Secretariat of State elected the five Commissioners, who gave Pope Francis the dubious document, with Grand Master Festing, and Boeselager was again appointed as Chancellor. Becciu was appointed by Pope Francis as his personal representative in the Order of Malta, and the official representative of the pope, Cardinal Patron Raymond Burke, was marginalized.
The "high animal" that Tosatti mentions, however, did not mean Substitute Becciu with the questions: "But do the heads of the AIF really command? On behalf of whom?"
Text: Giuseppe Nardi
Photo: Vatican.va (Screenshot)
Trans: Tancred vekron99@hotmail.com
AMDG
Posted by Tancred at 8:06 PM 16 comments: Links to this post 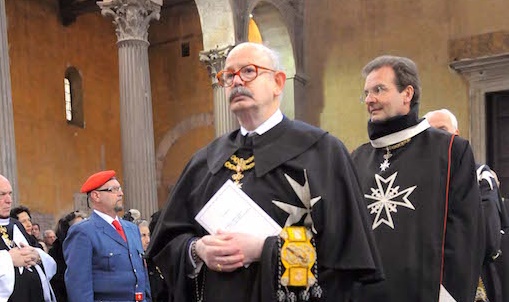 (Rome) The 56 electors of the Grand Council of State have elected the new Grand Duke of Rome, Fra Giacomo Dalla Torre del Tempio di Sanguinetto, as the new prince and grand master of the Sovereign Order of Malta. The election took place in the Villa Magistrale in Rome, an extraterritorial area under the Sovereignty of the Order.

The 80th Grand Master in the almost thousand-year-old history of the Order will be sworn in on the Aventine on Sunday. This will not take place before the Cardinal Patron of the Order, Cardinal Raymond Burke, but the Apostolic Special Envoy, the Apostolic Special Envoy, the Archbishop of Cordoba, Angelo Becciu, appointed by Pope Francis on February 4, Substitute of the Vatican Secretariat of State.

The new statthalter of the mayor

Giacomo Count Dalla Torre del Tempio di Sanguinetto was born in 1944 in Rome. He comes from the ancient Catholic nobility from the area of ​​Treviso. He studied at the University of La Sapienza in Rome, specializing in the field of Christian Archeology. At the Pontifical University of Urbaniana , he was a professor for ancient Greek and chief librarians and archives of important collections of the university. In his writings, he appeared mainly with essays on the art history of the Middle Ages.
In 1985, he became a member of the Maltese Vicar, and in 1993 he took the solemn vows. He became a member of the First Order of the Order, for which he has since exercised numerous leading functions. From 1994-1999 he was Grand Priest of Lombardy and Venice, from 1999-2004 member of the Sovereign Council, from 2004-2008 Grand Commander of the Order. As such he directed the order after the death of the 78th Grand Master, Fra Andrew Bertie, already as a statthalter until the election of the 79th Grand Master. Since then he has been the Grand Prince of Rome.

The Counts di Sanguinetto are closely connected with the papal court. The grandfather of the present head, Giuseppe Dalla Torre del Tempio di Sanguinetto (1885-1967), was the City Councilor of Padua for the Catholic Union and in 1915 he became president of the Catholic Action of Italy. As such he supported the peace course of Pope Benedict XV. against Italian participation in the First World War. In 1918, the Pope appointed him President of the board of the Osservatore Romano, and in 1920 he became chief editor. It's an office he held until 1960. Before and during the Second World War, he turned against the neo-Nazi (ideals) and atheist (Communism) ideologies and their despotic racial and class antagonisms. In constant friction with the fascist regime, he and his family lived in the Vatican for security reasons. The election of John XXIII. and the appointment of Cardinal Secretary Domenico Tardini led to his resignation.
The father, Paolo Dalla Torre del Tempio di Sanguinetto (1910-1993), was a renowned art historian who also dealt with the Church history of the modern age. Since 1938 he worked for museums of the Vatican. From 1961-1975 he was Director-General of the Vatican Museums . As City Councilor of Rome for the Democrazia Cristiana (DC), he also held political positions after the Second World War.
Giuseppe Dalla Torre del Tempio di Sanguinetto, the President of the Vatican, and the General Council of the Knights of the Tomb (Order of the Knights of the Holy Sepulcher in Jerusalem). After teaching at various universities, he was a rector of the Catholic, Roman private university LUMSA, President of the Association of Italian Catholic Lawyers, adviser to Italian Prime Minister Mario Monti (2011-2013) and member of the National Bioethics Council of Italy.

In a declaration by the Maltese Order about the Lieutenant of the Grand Master,

"One of the most important tasks" of Fra Dalla Torre as a Lieutenant of the Grand Master "will be to work on the reform of the Constitution and the Codex of the Order."

The current Constitution entered into force in 1961 and was last reformed in 1997.

"The proposed constitutional reform aims to remedy potential institutional weaknesses. The recent crisis has revealed some weaknesses in the control mechanisms of leadership. These will be taken into account in the reform. In the foreground, the reform will need to strengthen the spiritual life of the Order and gain more professed members. In addition, more appointments are to be admitted to the first class. The talks have already been started, and all members of the Order are invited to make proposals."

On the powers of the Lieutenant of the Grand Master, the press release states:

The Lieutenant of the Grand Master who is sovereign and religious head of the Order, has to devote himself entirely to the prosperity of the Order and must be a model for all members with a life according to Christian values. He exerts the highest authority. Together with the Sovereign Council, he enacts statutory provisions that are not contained in the Constitution, announces government acts and ratifies international agreements. The magisterium of the Grand Master resides at the Magistrate's palace in Rome. "

[Update] A short version, which was first published in error, is to be regarded as irrelevant.

Posted by Tancred at 9:13 AM 20 comments: Links to this post