Edit: is Bob Wright’s admission of ABC bias and left-wing bias all there is?

[Washington—Feb. 26, 2020] ABC News gave an exclusive statement to Project Veritas after ABC was shown the undercover video of veteran ABC News Correspondent David Wright describing himself as a “socialist” and complaining that his bosses refuse to give President Donald Trump credit.
This is the exclusive statement given to Project Veritas by ABC News: “Any action that damages our reputation for fairness and impartiality or gives the appearance of compromising it harms ABC News and the individuals involved. David Wright has been suspended, and to avoid any possible appearance of bias, he will be reassigned away from political coverage when he returns.”
Wright was covering the New Hampshire primary for “Nightline,” when he revealed his frustrations with his bosses for refusing to cover President Donald Trump fairly and not giving voters fair coverage of the presidential campaign.
https://www.projectveritas.com/2020/02/26/exclusive-statement-to-project-veritas-abc-news-suspends-political-correspondent-david-wright-after-he-is-caught-on-undercover-video-identifying-himself-as-a-socialist-and-admitting/ 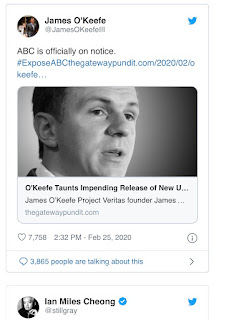 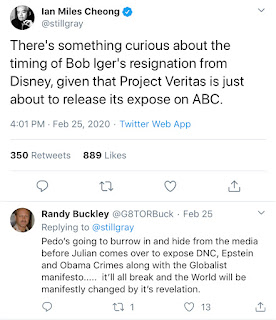 The media has a definite manipulative agenda which is Bolshevik in nature. There is no belief in fairness. They were just caught and now have to "reconfigure". Pope Bergoglio does the same exact thing but isn't quite as good at it as ABC.