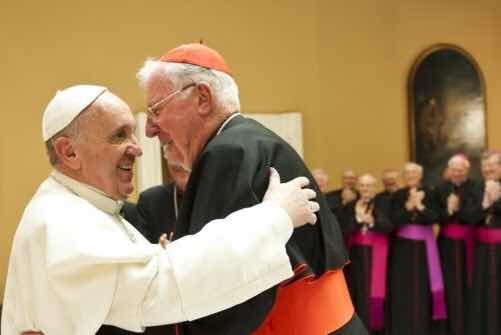 Bergoglio with O’Connor, to whom he owed his papacy.

Edit: pay close attention to figures who try to say this isn’t an ideological crisis. The whole jettisoning of sexual mores against the sexual abuse of children was a point of leftist political and social metastasis and experimentation during the late 60s with the mass sexual abuse of children an elite German preparatory school run by the Greens, an Austrian girl’s orphanage, or the depredations of political figures like Red Daniel Cohn-Bendit, or Frederic Mitterrand.

(Rome) Did Pope Francis give the order to stop investigations against British Cardinal Cormac Murphy-O'Connor?

Cardinal Cormac Murphy-O'Connor, who passed away in 2017, played a key role in the election of Pope Francis. This was revealed in November 2014 by his former spokesman Austen Ivereigh in his book "The Great Reformer" about Pope Francis.

The former Archbishop of Westminster and Primate of England and Wales was, according to Ivereigh, a group of four cardinals, the British journalist and author called them team Bergoglio. In addition to Murphy - O'Connor, the team included Godfried Danneels, Karl Lehmann and Walter Kasper. The task of the group was the preparation of the election of Cardinal Jorge Mario Bergoglio to succeed Pope Benedict XVI.

The biographers of Cardinal Danneels unveiled a year later, in the fall of 2015 the existence of a secret circle in the Catholic Church to which the highest church representatives belonged. The group formed in the mid-1990s on the initiative of Cardinal Carlo Maria Martini SJ. Their goal was the boycott the  pontificate of John Paul II, then once again, Benedict XVI. The secret circle was named after the venue Sankt Gallen in Switzerland. According to Cardinal Danneels, the members called themselves "the Mafia".

On the basis of these revelations, the picture emerged that the Bergoglio team was the executive arm of the St. Gallen secret society. Pope Francis owes them his election.

Marco Tosatti, together with the Canadian news website LifeSiteNews, now raises serious allegations against Pope Francis. His gratitude to his great election victory went so far as to stop investigations by the Congregation of the Faith against Murphy-O'Connor. Tosatti refers to a "Vatican source", which he describes as a "prominent former figure of the Roman Curia.”

The incident took place in June 2013, three months after the election of Pope Francis. The Prefect of the Faith,
Gerhard Müller, was celebrating Mass with a group of German students when his secretary came to him and whispered in his ear that Pope Francis wanted to speak to him immediately. The Pope does not care if he is celebrating. He wanted to talk to him right now. In the sacristy, the Prefect ofFaith  met a "frustrated" Francis. He gave him the unequivocal order to immediately stop the initial proceedings against a friend of the pope.

The "Friend of the Pope,” Tosatti said, was no lesser than Cardinal Murphy-O-Connor. There was an investigation against the former Archbishop of Westminister from the Congregation for the Doctrine of the Faith, of situation reported by a woman claiming to have been abused by a priest at the age of 13/14. For fifteen years she had tried in vain to draw attention to her case without being heard by the competent authorities. The highest competent body was Cardinal Murphy-O-Connor. Finally, she turned directly to the Congregation of the Faith in Rome.

"Why such an unusual order, which was given in such unusual and inappropriate way to the Prefect of the Congregation for the Doctrine of the Faith?" Asked InfoVaticana.

According to Tosatti, the papal order to terminate the investigation meant that the cardinal simply died on 1 September, 2017 without having to justify the matter.

The Vaticanist, along with LifeSiteNews, had asked various Vatican authorities for information on the matter, without getting an answer. However, LifeSiteNews learned that the woman was recognized by the Archdiocese of Westminster as a victim. She was paid compensation in an out-of-court settlement. She had been sexually abused by Father Michael Hill.

Hill was sentenced to five years in prison in 2002 for the abuse of three minors aged 10 to 14 years. Already in 1997 he had served a sentence for a similar offense. In the 20 years between his ordination to the priesthood at the end of the 60s and the end of the 80s, he is said to have become indecent with about 30 male minors. The British newspaper The Guardian accused Cardinal Cormac-O'Connor of moving Hill from one parish to another and giving him new tasks despite having specific warnings about his abuse of children.

In 1985, he named him chaplain at Gatwick Airport, where Hill abused a mentally handicapped adolescent who had missed his flight.

Several therapists had warned the Cardinal that Hill could abuse more children. Instead, Murphy-O'Connor accepted that the archdiocese paid pain relief to the victims on the condition that they remain silent on the matter, otherwise everything is denied.

The woman who appealed to the Congregation for the Faith said she had been abused by Hill in the late 1960s. At that time, besides Hill, other priests were involved in the abuse, including Murphy-O'Connor.

Nothing about it in Austen Ivereigh’s obituary.

I missed it to the very end of the posting. These priests were alleged to "have passed the little girl" around among them. Evidently, they then went to confession to each other and sealed the deal with the "silence of the confessional".

BUT SERIOUSLY.....CHECK OUT “MOSSAD 101” on NETFLIX
Reminds you what you coulda been if you had the courage

Pray for him, I think he in fear of his life again this Mafia, He is not in command, Need lots of prayers.