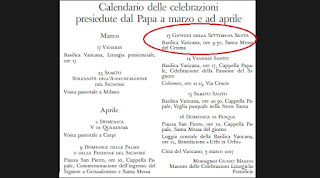 (Rome) The Holy See announced the papal celebrations for the Holy Week, together with the Feast of Easter. As in previous years, the calendar is devoid of the day of the Holy Thursday.
On the morning of the 13th of April, the Pope will be celebrating the Chrism Mass as usual in St. Peter's. The Mass of the Last Supper is not mentioned,  the evening of Holy Thursday, with which liturgically, the Triduum Sacrum begins.
Pope Francis will not celebrate the Last Supper of the Lord in the Lateran Basilica, the Episcopal Church of Rome and the "Mother of All Churches", but in a place not yet known. In the fifth year, a central liturgical moment, which is of paramount importance to the Universal Church, disappears from the field of vision.
As in previous years, a "spectacular" foot wash can be expected in 2017 as well. The speculation among Vaticanists is currently looking at whose feet the Pope will wash this year, excluding the public and the Church.
The Mass on the evening of the Holy Thursday is a liturgy of constitutive importance for the Catholic Church and of great concentration. The washing of the feet recalls the sign the Lord made to the apostles. It's a sign that the apostolic succession must always be a humble service. To express this, Popes, Cardinals and Bishops wash feet as direct followers and direct subordinates.
This is just one element. On the same evening, the establishment of the Blessed Sacrament of the Most Holy Sacrament was conceived by Jesus Christ, and inseparably, the establishment of the consecrated priesthood. This dual institution forms the center of the liturgical liturgy and is closely connected with the Church as a sacred sacred space. This really requires that the Holy Mass in Cœna Domini be celebrated by the leaders in their bishop's church with the faithful.
In other words, the establishment of the sacrament of the priesthood and of the altar's Sacrament (Eucharist) are again behind the gesture of footwashing, which appears above all as a social gesture, through the papal visit to an unknown, closed place.  It's an aspect emphasized by the circumstance that Pope Francis has also washed the feet of Muslims.
Since the visits to prisons and the refugee home, the question has also been raised as to whether Pope Francis gave Communion to those others than believers. Corresponding inquiries were not answered either by the Vatican or by the chaplains of the institutions visited.
In 2014 an initiative of Catholic media called on the bishops not to leave their cathedrals this evening to celebrate in other places. The absence of the bishop from his bishop's church is an "anomaly". This initiative, however, had to fallen into the void, since it was the Pope himself who left his bishop's church, the Lateran Basilica. Pope Francis has made the central Liturgy of Holy Thursday "invisible", according to Messa in Latino. The Holy Mass in the Lateran Basilica was open to all the faithful and was broadcast on television.
The Missa in Coena Domini by Pope Francis, which exclude the public:
2013: Visit to the Youth Prison
2014: visit to a disabled facility
2015: visit to prison
2016: visit to refugee home
2017 :?
Text. Giuseppe Nardi
Photo: Vatican.va (Screenshot)
Link to Katholisches...
AMDG
Posted by Tancred at 7:51 AM

Bishops are no longer consecrated. They are ordained. The taking away of the sacred character is obvious. Priests will no longer be ordained as the priesthood of the laity takes control. "Badges, we don't need no stinkin' badges" was foretold in "The treasure of the Sierra Madre". Priests, we don't need no stinkin' priests. We make our own rules. We have a pope who will make it so.

This is politically charged false humility (with cameras clicking in the background). If the pope wants to be serious about Holy Thursday, he can go wash Burke's feet.

Agree 100%
Our chapel uses the pre-1950 holy week & obeys after midnight Holy Communion fast.
I still to this day have no idea why Pius XII changed so many vital traditions.
The revolution started in 1951,not 1962.

Yep. Pius XII is hero worshipped by so many trads (but not this here trad) because he had Bugnini (of all people) destroy Holy Week. It needs to be changed BACK, I believe it will but not until post chastisement.

BTW, picture of Francis washing and kissing non christian women's feet, what a creeper this guy is.

There are active priests who share our belief and holy mother church will one day reject all the changes from Dec.1950 onward.

One of my personal favorites is from the old days back in Buenos Aires where he kissed and washed the feet of babies who were being breast-fed in the arms of their mothers. Apparently he is very vocal ins support of Moms unabashedly breast feeding in church. He told Moms to feel free to feed their babies in the Sistine Chapel during Baptisms....
Btw- Is there any mention of 'foot kissing' in the Holy Thursday ritual? I don't remember Christ doing this at the Last Supper, or ay other popes doing this. The pictures of these occasions with Francis are disturbing and almost lascivious is some strange way. It gives me the creeps.
Can anyone confirm whether or not this is a licit part of that liturgy- or some creative improvement from Francis?

"Possible visit sites PF's Soros handlers might suggest: a gay bar, an abortion clinic, a Masonic hall, a mosque, a porn shoot using trafficked 'stars'. Those though might be for year 5. This year might be the Lutherans"
This comment by Wsyzr Laser is 100% what we would expect from Francis and his crowd. It's hilarious to speculate about where he'll go, it it's also tragically sad at how the Church and especially the office of the Pope has been degraded by Bergoglio and company over the last 4 years. Isn't it?
I have an old tape, made by my grandfather in 1949, right after WWII at St. John Lateran (I think). We had the 1 1/2 hrs of film made into a dvd afew years ago. It is of Pope Pius XII conducting Holy Thursday observances there. The quality of the coverage is about 80% due to the age of the original film, but we have about 25 cardinals in cappa magna in the procession, monks (mostly Dominicans I think), in the crowd, and also Trinitarian friars with their white habits and big crosses on their scapular...all wearing the tonsure. There are nuns wearing all the beautiful, old 1950's style habits....truly fantastic...and crowds of faithful applauding the Pope.
It must have been Holy Thursday, because Pius XII is wearing very simple, almost penitential robes...just an alb, cincture and stole, but carrying the Blessed Sacrament wrapped in a long white shawl to the Altar of Repose. Priests attending the Pope carry candles and a canopy...and Pius is minus his zucchetto. Very somber. Clouds of incense. No music of course...the film has no sound.
But compare that wonderful, magnificent scene, to the hideous way Francis presents himself as Pope, and his initiatives and ceremonies, and you see how far the Church has sunk in 4 years. Just for us to joke/speculate where he'll spend Holy THursday is tragic. Despite all it's faults, the Popes from 1965-2012 followed Catholic tradition for Holy Week...as bland and as unimpressive as they made it. But this guy Francis makes a mockery of anything traditionally Cahtolic. He and his people should be run out of office.
And I think that is coming sooner that we think.
Don't be surprised if soon....very soon, a group of many more Cardinals that we could even hope for, confront Francis and demand that he resign. It's coming.
Damian Malliapalli

I'm certainly expert but on this, but some of the '55 reforms made sense: having the Easter vigil moved from the morning to the evening, for a start. Aidan Nichols, I believe, has a good take on this.

Pre-1950 Holy Week is the oldest liturgical tradition in all of Christendom.(east and west)
Post 1950 is a no go zone for me brother.

I dislike Deacon Jorge but he's not a queer.

That is just creepy and weird. Gives me the creeps too. ugh.

I sincerely hope you are right. It would have to be considered a divine intervention, because nobody else but God could enable these apparent cowards to defend the faith. It has already gone on far too long, but, God knows better and knows when to intervene.
These men are destroying the papacy, the faith, the church, and scattering the flock? Most definitely. Please God, do not delay.

Read a comparison of pre-1968 and post-1968 rite of diaconate.
Its even more doubtful and obvious than ordination/consecration post 1968.
I'm not asking anyone to agree with me,read it for yourself.

Made me chuckle, Kathleen--"nobody else but God could enable these cowards,i.e. the episcopal class, to defend the Faith."

I really like that Pope Pius XII restored the Easter vigil to its proper place, which is on the night of Holy Saturday going into dawn.

I remember when I was a child (I'm past 70), people were already celebrating the Resurrection in the morning of Holy Saturday, which did not comport with the fact that Our Lord was in the tomb for three days before He resurrected.

So the Apostles got it wrong?

Its a vigil thus taking place 24 hours before Easter Resurrection Day according to Pre-1950 calendar.

If Bergoglio hands out wafers HE consecrated, are they truly Holy Communion? Can he even form the necessary intention to confect the Blessed Sacrament? Just wondering.