(Bonn / Rome) South of the Alps it has been carefully noted that the "German front" in terms of "new mercy" is not as stable as it initially  appeared on first impression, or at least such an impression was conveyed. Is registered especially been noticed that six German bishops in the line of Kasper / Marx have been rejected.
If the German cardinal Walter Kasper is considered head of the rebels, then it is  Cardinal Gerhard Müller as  the highest ranking of his opponents is also a German.  With Cardinal Walter Brandmüller and Auxiliary Bishop Athanasius Schneider, two more Germans of international weight  raise their voices against Kasper's attempt to bridge the gap between the teachings of Christ and the "real life" of many people by adapting to the latter by passing over the doctrine and mission of Christ over in silence. 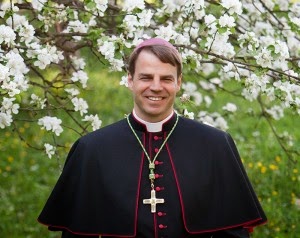 Bishop Stefan Oster of Passau
It is also closely noted in Rome, among some it is  welcome, while others greet it with unease that the second questionnaire of the General Secretariat of the Synod of Bishops generated little interest in  the German dioceses. A lack of interest that the full-bodied announcement with a threat of schism by the President of the German Bishops' Conference, that there was a "state of emergency" for the German church's divorced and remarried is not supported. It is reported that more Catholics of the German-speaking countries have signed the Appeal to Pope Francis  then responded to the questionnaire. The appeal of faithful Catholics, whose first signatories include Cardinals Burke and Brandmüller, and  Bishop Athanasius Schneider who invite the Pope and the Synod of Bishops to reaffirm Catholic marriage and morality against attempts at erosion in no uncertain terms.
Faithful Catholics are simply motivated by the desire to follow Christ in fidelity to the Church established by Him.
Now in these days in Rome the news quickly made the rounds that six bishops of the German Bishops' Conference have renounced allegiance to the Cardinals Kasper and Marx. Six out of 27 bishops are not even a quarter of the German diocesan bishops. In Rome, however, the principle is still sound, that one can not change the word of God by majorities. It was first part of the Synod of Bishops in October 2014 where it was  Cardinal Raymond Burke, who recalled the essential elements of the Catholic Faith in an intervention. The formation of a counter group in the German Bishops' Conference thus represents an important step. 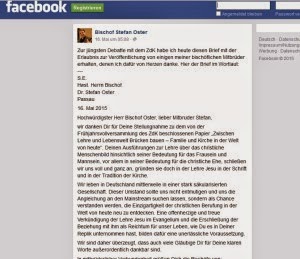 Five Bishops Support Bishop Oster
Bishop Stefan Oster of Passau, Bishop Rudolf Voderholzer of Regensburg, Bishop Gregor Maria Hanke of Eichstatt, Bishop Konrad Zdarsa of Augsburg, Bishop Friedhelm Hofmann from Würzburg and Bishop Wolfgang Ipolt of Görlitz have  renounced allegiance to the  BTB President and Munich Archbishop. Cardinal Marx has to feel encircled by dissidents in Bavaria. Here, the actual dissenters sit at the Palais Holnstein, while gathered around the Bishop of Passau Oster mustering chief shepherds  in full communion with Rome.
In this respect the hopes of the young Bishop of Passau are fulfilled.  Until recently it yet looked as if he would meekly submit to the powerful archbishop of Munich-Freising (see Passauer Distancing - And an Easter Bunny Crawled under Marx's Wing in German).
The bishops of Regensburg, Augsburg, Eichstatt, Würzburg and Görlitz announced three days ago in a public letter of thanks to a statement by  Bishop Oster where he defended  Catholic marriage and morality. Thus, a lone voice quickly became a chorus. It is conceivable that other bishops should come whose voices have yet remained unheard so far besides  the high-handed Cardinal of Munich.

In letters of appreciation for Bishop Oster, his five brothers wrote  last MAY 16:
"We live now in a highly secularized society in Germany. This fact should not discourage us and make us look at the guidance of the mainstream, but it should be seen as an opportunity to rediscover the uniqueness of the Christian vocation in the world today. Yours was a  frank and faithful proclamation of Jesus' teaching in the Gospels and the development of the relationship with Him as a reward that enriches our life, as you have done it in your replica, but it is an indispensable requisite.
We are therefore convinced that even many believers  are most grateful to you for your clear words. "
The letter was  a detailed opinion sent by Bishop Oster on 11 May from his Facebook page. In it he refuted point by point the 'reform' exposures, which they (ZdK)  collected at their plenary meeting on 9 May in Würzburg by the Central Committee of German Catholics (see BDKJ spokesman acting as Homo lobbyist - ZdK calls "unconditional acceptance" in German), The requirement of ecclesiastical blessings for homosexual couples is only one point in the long ZdK catalog.

From the Single Courageous Bishop Oster, the Lonely Voice Quickly Became a Group 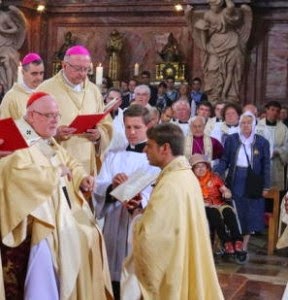 Cardinal Marx Consecrated  Oster a Bishop
Bishop Oster was the brave one who reacted quickly and decided on his  own initiative and disagreed publicly with the Association of Catholics ZdK. He objected so implicitly also to his "Reformation" brothers in the episcopate, because Cardinal Marx had taken position in the ZdK paper. The Munich Archbishop remained so mysterious that the observers interpreted the reaction as expressions of sympathy towards ZdK which could  play to openly for tactical reasons.
Unlike Marx, Bishop had Easter then had to accept  some  irreverent criticism, particularly on the Internet portal katholisch.de that is funded by  the German Bishops' Conference. The internal church struggle  is quickly becoming a sniper's duel in Germany. Whoever defends  Catholic doctrine, must dress warmly. Rebels and renegades have occupied numerous key positions for many years, particularly in the official Catholic media. The tragedy of the German Church is also  that the bishops are hedged around by an exclusive church apparatus.
Oster's step will help to clarify the fronts. Six bishops have shown their Catholic color. Others conceal themselves in calculating silence. In Rome it has been noted  what is happening north of the Alps. Many prelates referred simply to  any representatives of the Kasper-proposal summarily as "the Germans".
Text: Giuseppe Nardi
Image: Focus.de/Diözese Passau / Facebook bishop Easter (screenshots)
Trans: Tancred vekron99@hotmail.com
Link to Katholisches...
AMDG
Posted by Tancred at 9:02 PM

Once again standing firm in the Faith is going to be called schism. Remaining in holy Church will be called being out of papal communion by the revolutionists. It is to The Church and Her holy Doctrines we cling, not to a man, even a pope. We are not like Protestants who followed their heretic filled with his own mortal sins, simply because he tickled their lustful ears.

God bless our Faithful bishops and priests and may Our Lady protect them from the wolves.

Oh praise be to God!!! All prayer, Mass, Rosary, etc. today for the good Bp. Oster and his 5 confreres...they're going to need many prayers, as the demons of hell (summarily known as "the Germans") will be released on them. May God strengthen and aide those with a heart still for Him. This is indeed a welcomed sign.

God Bless Bishop Oster, and the others who renounced the heresy and errors of Cardinals Marx/Kasper. Six bishops out of 27 does not seem like many, but the dissidents and liberal radicals of Germany can no longer present themselves as a united front. Let us pray that more bishops desert the Kasper/Marx radical agenda.
It is obvious by the selection of the radical liberal British Dominican who was once Master General of the Dominican Order that Pope Francis really sides with the Kasper/Marx agenda, and that he is behind it all. He also has a shadowy network of associates behind the Papal throne pushing the liberal appointments and agenda. Francis' network, like a spiders web, reaches around the world. We know their names well....Dolan, O'Malley, Nichols, Tagle, Mariadiaga, Forte, Marx, Kasper, Ricca, etc.
I believe that this radical agenda will fail at the Synod of October and that those Cardinals and Bishops faithful to the Catholic teachings of the ages will win a magnificent triumph.
I believe the liberals and Francis will be so resoundingly defeated that Francis will only be able to be a "lame duck" Pope. He'll be in office, but he won't dare speak much.
That will be a blessing.

Thank God there's something good in Germany....I recall that at the beginning they were only 12 announcing the Gospel in the world's largest empire, and went to Rome, where Peter and Paul died for Their Master, never forget it. God bless.

Let us hope that the German people follow the Bishops that are defending the true Catholic position. Their track record of following the wrong guy is very worrisome. I.E. 1517, 1936, Cdls. Marx, Kasper, etc.

If you look at the priests and nuns, and a lot of the laity who are following Marx and Kasper (and this applies in all liberal/radical circles in whatever country), you'll be surprised that a good 85% of them look like they are pushing 70 or older....especially the lay clothes nuns.
I watched the recent canonization from Rome this past Sunday on TV. Often the camera panned thru the crowd, and many groups of nuns were seen. Nearly every time a group of traditional habited nuns were shown....and they were more than just a few...none looked older than 45-50 and many were very young...even the Italian/European nuns.
But when they showed other groups of lay clothes women...who were obviously nuns....they looked at least 70...all of them.
Francis didn't look so good on Sunday, and practically fell down the stairs at the entrance procession leaving St. Peter's.

I am not so optimist as you are regarding the Synod.

I am not so optimist as you are regarding the Synod.

Did the national origin of many, perhaps most, of these 'younger' nuns in conservative orders indicate anything to you about why these groups appear to be thriving?

This question, Gaybriel, shows your racist, sexist homophilia, and your usage, born of preoccupation, of the apostrophes around "younger" gives rises to a reasonable assumption that you slather your face with a certain hemorrhoid shrinking cream before stepping out for the night. How dare the likes of you question any sister!

You really need a good spiritual advisor and confessor.

Gabriel, despite Anonymous 9:04's point "even the Italian/European nuns", you throw out your question in angry desperation. Perhaps you share a view similar to Kasper's re:"Africans should not tell us too much what we have to do"? Given your record here, it's not surprising to expect this kind of thing from you.

Neither of you will attempt to answer the question.
By the way Barnum, if I responded to you with the language you employed here, my post would have been deleted.
Bear that in mind when next you draw your thoughts from your underpants rather than you mind, such as it is.

Just keep "quoting" SACRED SCRIPTURE (with exact verse numbers)
and
the DOCTRINE of the FAITH which is contained in the "Catechism of the Catholic Church, second edition" of 1997.

In light of more recent events, it would appear the rats may soon be scurrying for cover. http://eponymousflower.blogspot.com/2015/05/investigations-against-president-of.html Kasperite Archbp. Paglia Under Investigation