Editor: there's currently no statement available as to why she became a Catholic, but her husband, being Irish, celebrates St. Patrick's Day,., and almost as important, check out her veil. 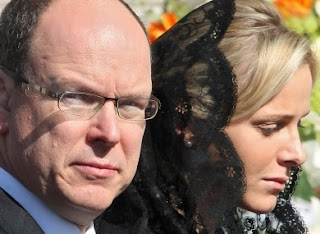 Monaco (kath.net/KAP)  Charlene Wittstock 33 the fiance of Prince Albert II of Monacho, is going to become a Catholic, according to a report from the Royal house.  In an official statement on Monday it is said that she is from a free and personal decision, coming into full communion with the Catholic Church.

The South African Charlene Wittstock was baptized as a protestant.  The civil wedding is set for the 1st of July.  The Church wedding will take place after in the family chapel at the Palace.

The Roman Catholic Church is the official state Church in Monaco.  The Principality has had its own Archbishop since 1981, who is appointed directly by the Holy See.  The freedom of other religions and confessions is guaranteed by Monaco's Constitution. [Pity]

Report here, from Strait's Times...
Posted by Tancred at 6:36 AM

Excuse me, but H.S.H. is Monegasque not Irish.

Yes, but his mother was Irish-American.