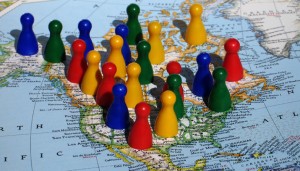 (New York) For 27 years the International Bulletin of Missionary Research  (News Haven, Connecticut) has published a yearly report about the situation of Christians in the world.  The "Status of Global Mission" - Report offers interesting and astonishing numbers every year of the numerical strength of Christians and other religions.  The strength of the various denominations are also be included.

In the report of 2011 (which deals with the year of 2010) puts the martyrdom of Christians right before your eyes.  The report defines "martyr" Christians, as those "who lose their lives violently for their faith".  The report estimates that in the last ten years (2000-2010), one million Christians were killed.  That involves the death of an average of 270 new martyrs every day.

The complete number of Christians are divided into six "large church groups".  The largest group is made up of the Catholic Church with  1.160.880.000  Catholics. In second place are the Protestants with 426.450.000 (for example: the national churches of the Lutherans, Calvinists and others)  In third place are the 271.316.000 Orthodox Churches and on fourth are the 87.520.000 Anglicans.  The fifth group is identified by the report as 378.281.000 "independents", who are seperated from the historical denominations and don't belong to any of them.  Then the last group is identified as "marginal Christians" of around 35.539.000, whose christology is doubtful relative to what is in the "published texts" of the "Bible".

In comparison to the 2,3 billion Christians there are around 1,6 billion Muslims, who are divided into various large groups and subgroups; 951 million Hindus; 468 Buddhists; 458 million adherents of Chinese religions and  137 million atheists.

Besides the strong media attention atheists get with the  likes of Richard Dawkins or Christopher Hitchens, their numbers have declined since the last decade (period of consideration 2000-2010).

Every day there are  270 Christians who are killed because of their faith.  Every year there are, however, 80.000 new Christians to replace them.  More than 31.000 of them are Catholics.  The number of Muslims grows daily at  79.000.  The number of atheists declines about  300 per day, according to the report.

The yearly report of the International Bulletin of Missionary Research continues with still more numbers.  Accordingly, there were  71 Million Bibles distributed worldwide in 2010. About two billion people listen at least once to Christian radio -- or television. In 2010 there were 7,1 million books published about Christianity.  In 1970 there were 1,8

Globally it is observed, the report continues,  that although Christianity is declining at this point in Western Europe, it is experiencing in other parts of the world a "remarkable" growth, also in Asia, where the announcement of the Gospel in "bitter" terrain is in evidence.  At the same time that there is a measurable growth in Christianity, as the "decline of atheism" which is evaluated in the light of the report against "the radical advance of neo-Atheism" before the Papal visit in England and Scotland which was described as "a doubtful leap forward" for an atheism, whose "hour had gone".

In conclusion there is the data of the Status of Global Mission-Report on the unity of Christians.  In 1900 there were 1600 different Christian denominations.  In 1970 there were 18.800 and in the year of  2010 even 42.000.  The Catholic Church is the most numerous with 1.160.880.000 and their worldwide scope with a the largest world-wide net of Diocese of all Christian denominations, but also all other religions of the world, the only universal Church and universal religion.  Far behind in second place is the Russian Orthodox Church with 100 million believers.  The protestant branch of Christianity falls in a hard to decipher myriad of communities and groups, which range in numbers between a few million to only a dozen or so followers.

insidecatholic.com
Posted by Tancred at 10:10 PM